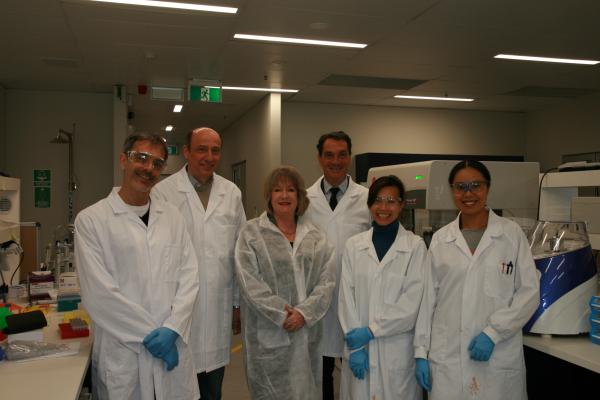 Pharmaxis was pleased to host the CEO of Cystic Fibrosis Australia (CFA) Nettie Burke at the company headquarters for a meeting with staff and a tour of our research laboratories and manufacturing facilities.

Pharmaxis developed Bronchitol for the treatment of cystic fibrosis patients and Ms Burke was keen to discuss the clinical development and local manufacturing of the product.

Another area of mutual interest is the fact that the Pharmaxis drug discovery team is investigating potential new therapies for fibrotic diseases.

Ms Burke addressed staff and some members of the board at a morning tea to explain more about the work of CFA.

Pharmaxis staff have initiated fundraising and collected more than $2,000 in the last twelve months to support Cystic Fibrosis Australia – funds which will be used to help people with CF and their families.

Pharmaxis CEO Gary Phillips recently attended the 2016 BIO International Convention in San Francisco from 6 – 9 June 2016. BIO is the biotech world’s largest meeting attended by almost 16,000 people from 76 countries. The BIO Business Forum hosted a record-breaking 35,700 partnering meetings with more than 3,400 companies participating. The drug discovery efforts at Pharmaxis are commercially driven and this is an important event for the Company to conduct market research amongst target customers, ie Big Pharma. Meetings confirmed that interest in Pharmaxis is growing.

The Company's most important objective was to connect with companies with whom Pharmaxis had previously discussed its LOXL2 anti fibrotic program - to keep them informed of progress and timelines. A second priority was to evaluate interest in the Pharmaxis neuro inflammation SSAO/MAOB program amongst companies that are looking for Alzheimer’s drugs - do they believe that the target has a place in treatment, what pre-clinical models would convince them of the potential value, what other neurology indications it might be appropriate for? The forum also provided the opportunity to discuss other aspects of the Pharmaxis pipeline.

The attached shareholder update summarises the Company’s participation at BIO.

In addition, Australia’s independent research publication Bioshares interviewed Gary Phillips both before and after the conference. The Bioshares articles may be read here:

Pharmaxis CEO Gary Phillips is attending the 2016 BIO International Convention in San Francisco from 6 – 9 June. BIO is the biotech world’s largest meeting - almost 16,000 people attended last year’s event in Philadelphia. It provides an opportunity for Pharmaxis to discuss its drug development program with potential partners and what they might like to see in a Pharmaxis program. Australia’s independent research publication Bioshares asked Gary Phillips about his plans for attending the conference. The Bioshares article may be read here.